In October 2020 Japan prime minister Yoshihide Suga unveiled a major shift in position on climate change and announced that Japan is aiming to cut greenhouse gases to zero by 2050 and become a carbon neutral society.

He also said that “Responding to climate change is no longer a constraint on economic growth,”. His Industry minister Hiroshi Kajimaya later told a news conference that “Carbon neutrality itself is a growth strategy, and we must carry it out with all we have,”

In this series of posts, we will try to understand how Japan can reach this goal of carbon neutrality and which type of impact it could indeed have on its economy.

Japan Greenhouse gas emissions were 1,155 MtCO2e (million tons CO2 equivalent) in 2018 according to ClimateWatch. CO2 accounted for 93% of this total, which is why “cutting greenhouse gases to zero” and “carbon neutrality” are often used interchangeably. It is however important to remember that CO2 is not the only greenhouse gas and that measures will have to be taken to reduce Fluorinated gases, Methane and Nitrous Oxide emissions. 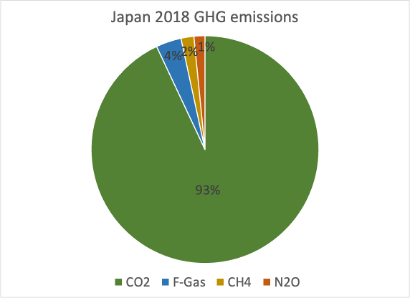 Fluorinated gas emissions come from Industrial processes; CH4 from Agriculture (67%) and Waste (23%). N2O emissions are mainly the results of agriculture and other fuel combustion (41% each).

A per sector overview of Japan GHG emissions for 2018 reveals that ~80% of the total emissions are a consequence of Electricity/Heat, Transportation and energy used in manufacturing/construction activities.

It becomes quite clear as to why the electrification of the transportation sector together with the development of low CO2 power sources has been at the center of the carbon neutrality talks.

It is however not trivial as to why this would be the best solution. Before starting this analysis, we will first have to wander into the second claim of the Japanese government, that carbon neutrality can be achieved in correlation to economic growth, and what would be the conditions for it to be true.

On a physical level economic activity, usually measured through GDP, is about the transformation of resources into goods and services. Our modern economies mainly rely on machines to perform these transformations. These machines in turn require energy to run.

Another way to approach the relation between energy and economy is to fall back and the definition of energy. In physics, energy can be seen as a measure of the transformation of a system. Therefore, a large economic activity requires a large amount of energy.

Extracting enough energy to power our machines can be done in different ways. The most effective one that we still rely on is burning fossil fuel. Humanity moved from a carbon neutral society (up to middle age) to our carbon intensive society because the energy density of fossil fuel allowed us to generate a vast amount of energy in a local area in a short time. This allowed us to power more machines and increase our economic activity.

A “green growth” will require a paradigm shift, and it might not be unreasonable to think that achieving carbon neutrality in the next 30 years might require to accept a decrease in GDP. The European Environment Agency recently published a paper supporting this hypothesis.

We will be reviewing the above assumptions in future posts as well as explore concrete actions that would have a significant impact on reducing Japan CO2 emissions.